Is the Trump Impeachment Inquiry Real?

We know, like us, you’re probably wondering what’s the latest on all the Trump stuff?

Well, there’s a whistleblower who has put President Trump in a really tough position and here’s what a few outlets and prominent people are saying:

Public support for impeaching Donald Trump and removing him from office has climbed significantly in the week since news first emerged that Trump sought foreign help for his 2020 re-election campaign, according to two polls released Monday. – The Guardian

They also reported that- The odds of Trump’s impeachment hit a new high of 71% in online betting markets, meanwhile.

Democrats aimed a fresh dagger at Donald Trump’s inner circle by subpoenaing documents from his lawyer Rudy Giuliani, as the President struggled to parry an aggressive impeachment gambit on a day of rapid developments.

The President seems to be reeling, waiting for the next blow to fall, defended only by his increasingly unhinged tirades, his tweets quoting supporters on cable news and confrontational and conspiracy-laden appearances by aides on TV.
The President’s unaccustomed struggle to control the narrative and to get his opponents to respond to his moves bodes ill for any hopes he has of avoiding a full House impeachment vote.
There is no sign of the organized, disciplined political and legal strategy that for instance helped Bill Clinton emerge from his impeachment trial as a viable President. 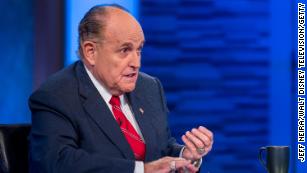 House Democrats subpoena Giuliani for Ukraine documents in impeachment inquiry
For days now, Trump has been unable to slow the momentum of Democrats as they investigate whether he abused his power by trying to pressure Ukraine to dig for dirt on potential 2020 foe Joe Biden and his son Hunter.
CNN reported Monday that Trump loyalists had warned him that he would almost certainly be impeached and that some doubted whether he really understood the magnitude of his plight.
Digging himself in deeper, Trump warned Monday he was trying to find out the name of the official who blew the whistle on his call and dealings with Ukrainian President Volodymyr Zelensky. Trump’s comment could be a potential violation of laws meant to protect truth tellers and could play into any eventual charges by Democrats that he is seeking to obstruct their investigation.
The whistleblower’s lawyers have already raised concern for their client’s safety, as Democrats try to persuade the unnamed official to tell the story that sparked their complaint on Capitol Hill.
—–
And you know the video commentary is pretty intense too!
Here’s what the Guardian has to say:

Donald Trump’s fondness for conspiracy theories stretches back years, to his claim to have seen “thousands and thousands” of Muslims cheering on 9/11, his denial of the climate crisis and many other falsehoods. 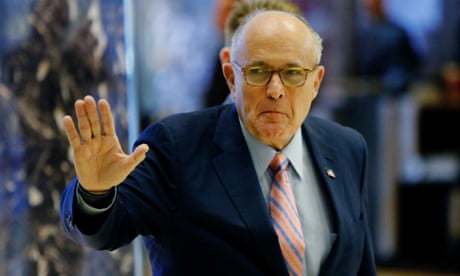 Indeed, you can date Trump’s entry into presidential politics to his 2011 “birther” fixation, when he claimed Barack Obama was born outside the US. The 44th president was born in Hawaii and his birth certificate proves it.

Now, Trump’s taste for scurrilous and malicious untruths has come back to bite him. The US president is facing an impeachment inquiry that could remove him from office, precisely because of his relentless pursuit of conspiracy theories.

Here are the five such theories that lie at the heart of the Ukraine scandal:

This goes right to the core of the impeachment inquiry, as it speaks to the “urgent concern” raised by a whistleblower in the intelligence services. According to the whistleblower’s complaint, Trump repeatedly urged the Ukrainian government to investigate the former vice-president, in the hope of gathering dirt on someone who stands a good chance of contesting next year’s presidential election

Trump’s theory begins with a truth: in 2016 Biden withheld $1bn in loan guarantees from Ukraine in order to winkle out its then chief prosecutor, Viktor Shokin. The prosecutor, Trump’s story goes on less accurately, was busily investigating Hunter Biden, the vice-president’s second son, who was a paid board member of a large Ukrainian gas company, Burisma.

Two and two makes five: Joe Biden, Trump concluded, was corruptly interfering in Ukraine in order to protect his son.

There are problems with this narrative. The Burisma investigation was dormant when Biden pushed for Shokin to be fired. And Biden was not alone in wanting Shokin out: several European governments and authorities including the IMF also pressed for his dismissal, because of his dire record on fighting corruption.

What about all his tweeting?

Well here’s what Kamala Harris had to say according to CNN:
Sen. Kamala Harris said on Monday that President Donald Trump’s Twitter account should be suspended following his tweets about the whistleblower whose complaint is at the center of the Ukraine scandal.
“The President’s tweets and his behaviors about this are just further evidence of the fact that he uses his power in a way that is designed to beat people down instead of lift people up,” the California Democrat and 2020 presidential candidate told CNN’s Anderson Cooper on “Anderson Cooper 360.”
“Frankly, when you look at what he’s been tweeting today directed at the whistleblower, directed at so many people, you know, I, frankly, think that based on this and all we’ve seen him do before, including attacking members of Congress, that he, frankly, should be — his Twitter account should be suspended. I think there is plenty of now evidence to suggest that he is irresponsible with his words in a way that could result in harm to other people. And so the privilege of using those words in that way should probably be taken from him.”
Check back for daily updates!
We are MommiNation
best black mom blog best blog for black moms cnn kamala harris mommination politics President trump trump impeachment
Share this post

How To Know if Your Child Needs Oxygen Therapy

There are different sicknesses and illnesses that could cause your child to need oxygen therapy. If your child hasn’t been diagnosed with a sickness or illness that affects breathing but...