Parenting My Son, The Overachiever

Parenting My Son, The Overachiever

I remember it like it was yesterday. The day my son was born was CRAZY, to say the least. It was also absolutely amazing at the same time. I will never forget the moment I laid eyes on him. The first words that came out of my mouth were “Oh my God!” Why? Because he came into the world weighing in at a whopping 9 lbs 5 oz! I was in shock, my husband was in shock, and so was my mom. I should have known then that he was not going to be an average baby. He has been an overachiever since day one.

Our son (who we affectionately call Third) was not even a full 24 hours old when he started holding his head up on his own. I’ll never forget that moment. We were visiting him in the NICU, and I was holding him. He was laying on my shoulder when all of a sudden, he raised his little head with his wobbly neck and began to look around the room. I should have known then that he had been here before. But I was busy marveling (and glowing with pride) at how strong this newborn baby of mine was. My thoughts were that this kid must have been born with some kind of superpowers.

Parenting My Son, The Infant As an infant, Third grew and advanced pretty quickly. His pediatrician would always sing his praises and tell us how great of a job we were doing at each visit. Our baby boy was growing physically and intellectually at an above average pace. At only three months old, he started holding his own bottle. He developed a love for music early on and would sing and hum to his little heart’s content. He also developed an early love for books, and he still loves to be read to. Third was such a fast learner (still is). I remember documenting in Qeepsake about how people would comment on how smart he was. I’d like to think it was my exceptional breast milk that did the trick, but you know. I probably shouldn’t take all of the credit because my husband did help out a little bit. However, this parenting thing was seeming to be a pretty nice gig.

Parenting My Son, The Toddler As our son has continued to grow and mature, he continues to amaze us and make us feel like we are KILLING this parenting thing. He observes everything and picks up on things so fast. As a church baby, he knows how to worship. If you say “Hallelujah” he lifts his hands in the air. If you say “Thank you Jesus” he starts dancing. I must say his shout is better than his dad’s! LOL! He knows several letters of the alphabet along with the sounds that they make as well as animals and their sounds. He also knows several colors. This dude just never ceases to amaze us. I’m trying to tell y’all. This kid definitely has superpowers.

My How The Tables Have Turned

I thought that my son would only use his superpowers for good! Why did y’all not warn me??? He has taken this whole overachiever thing and twisted it into something that I do NOT appreciate. What am I referring to? I’m referring to how he has taken it upon himself to get an early start on his Terrific Twos. Yes, I took a page out of my mother-in-law’s parenting book. I’m calling them the Terrific Twos in hopes that those positive words will be made manifest in my son. I’ll let y’all know how that goes. But I digress. The point is, we have arrived at this pivotal point ahead of schedule, and I am not happy about it. Third has developed a little attitude that my husband and I have very little patience for. He wants what he wants, how he wants it, and when he wants it. If you deviate from the plan that he has in his mind, be prepared for him to either scream bloody murder or try to throw a little tantrum. He has two different types of tantrums. Option A consists of him throwing his arms around and intentionally hitting any and everything in his path while maintaining a mean stank face. He specifically tries to hit the item that he originally wanted or the person who upset him. Tantrum Option B is less complex. He fusses and throws himself to the floor. But he throws himself slowly because he ain’t REALLY about that life. I guess I didn’t pass my gangsta status down to him. Either way, he tries to test my gangsta on a regular basis. I just have to remind myself that this is not a reflection of our parenting.

Parenting My Son, The Manipulator Gotta keep my eyes on this dude

This little boy thinks he’s slick. First, he has become the King of the fake cry. Almost every time he is told “no” about something, he cranks up the old cry machine. And his acting skills are so bad. If he was an actor, he’d be PERFECT for Tyler Perry’s The Haves and the Have Nots. Plenty of bad acting going on there. But his fake cry has nothing on his good guy routine. When he gets caught doing something he should not be doing, he turns into a Walmart greeter. It goes a little something like this:

This was not a part of the parenting book! Who is this kid and what has he done with my baby??? Daddy trying to be patient

Truth moment. I don’t know how to handle this Terrific Twos stage. The worst part about his tantrums is that they make me laugh. I cannot take angry Third seriously! He’s such a sweet and loving kid that the tantrums do not fit. It’s comical to me, and I end up laughing most of the time. Which is counterproductive because I do not need him thinking that his behavior is funny or ok. But I just can’t help it y’all! It was like the rare occasions when my dad would cuss. He was NOT a cusser so it was always weird when he would use profanity. And what would we do? Laugh…in his face. Not the appropriate response when your dad is that upset, I know.

I’m also trying to find the balance between correcting him and remembering that it’s a developmental thing that he has no real control of. While the tantrums and such are simply growing pains, he also needs to know that the things he does are not ok, right? I find myself torn so many times. So, I try to extend grace and exercise as much patience as I can before I flip the switch over to correction. Sometimes my husband thinks I’m being too lenient (dads and their sons), but part of me feels like it’s unfair to punish Third for something that he can’t really control. This parenting thing is hard!

I don’t know if I’m doing this right or totally messing up. How do you respond to a child that’s going through this stage? Am I completely missing the mark? Leave me a comment and let me know your thoughts, PLEASE. And thank you so much for taking the time to check out my blog.

Making it Through Those Awkward Thanksgiving Conversations.

When my mother died without a will, I learned a big lesson about money management as an African American 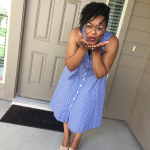